I have been posting my race/training reports for the last while up on the Trimes Team Website, check it out here, follow some of Canada's elite athletes, and add it to your blogroll. 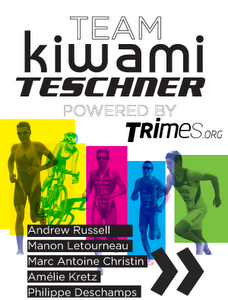 Riding by Pat Bay today I was reminded, by the similar coastline, of a beauty movie I saw on the flight home from Auckland a few months ago. Scanning through the selections I came accross this one that looked small budgeted but with potential. I'm glad I gave it a go, best film i've seen in ages.

First video is of the trailer and the second is of the classic added haka feature in the credits. Definitley recommend "Boy".

Back from San Diego this week and quickly back into training. Building upon my first race is what we are after. Improving race specifics and as we all saw on Saturday, run speed:) I've posted a bit about the race on the Trimes Team Blog.

In this post I'd like to get into a topic surrounding the race and what came out of it afterwards. Long has been the conception that ITU racing is a "wet runners" race, that is to say that the bike is meaningless and just serves as a precursor to the run. In Ironman drafting is cheating, so how could it acceptable anywhere else??

In hindsight, the timing of the Lance Armstrong / Simon Whitfield shampoo/blowdry ITU twitter exchange could not have come at a better time. Armstrong voiced his view of the ITU format, which I think represents a lot of 'old school' educated triathlon figures. ITU has never really been accepted, besides once every 4 years, in the general triathlon public as the pinnacle of the sport.

Person: " you do triathlon....so have you raced an ironman?"

ITU athlete: " yea, but no i race the Olympic distance"

After experiencing the leadup, race, and attention afterwards in San Diego I feel as if ITU has made a significant jump in respect and appeal over essentially 3-4 days. There was plenty of publicity leading up towards the home soil race for the Americans as it was their final selection point. Stories on each athlete and their journey to that point. However, the race did the talking. The race opened the eyes of the Age-group masses as to what ITU racing is at the highest level, WTS. During the swim WU you could hear the spectators commenting on the speed and tenacity already. In the middle of the bike there were points screaming through transition where you could almost hear them holding their breath. During my brief spell on the run where we bolted out of T2 the reactions were even more heightened. When you see a sport in the flesh you truly get a grasp of the speed and skill involved, J.Brownlee demonstrated this quite well. Placing 54th in the event, the amount of sincere congradulatory comments was very humbling for a back of the packer. There was definitley a buzz in San Diego last weekend, like an alarm clock of realization.

Macca's involvement in the ITU has raised the awareness. Many people were there on Saturday to see Macca. To see him place 30 something gave the public a good understanding of the level of racing here. Triathlon Magazine captured Macca after the race in quite a geniune moment explaining the toughness of ITU racing. It couldn't have come from a more respected and accomplished athelte in Ironman & ITU. He was an ITU World champ in the early years, 2xIronman World Champ, and now back at ITU. There is no better spokesman for how ITU has evolved and how freakin fast the athletes of today are in ALL 3 sports. 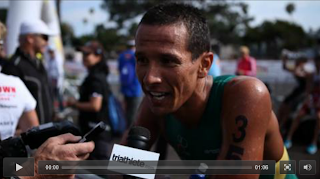 This has to be my favourite photo from the weekend. What contrast going on here... 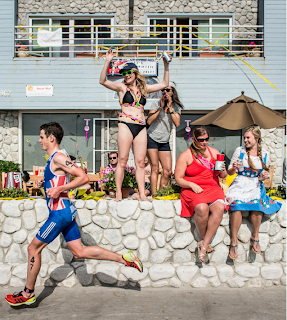 Lastly, a parting shot exiting the water for a second lap of shampooing:)

First time I heard we were doing a 'Mixed Bag' run workout w Jon it reminded me of going to birthday parties and getting a goodie bag at the end. Not sure why I made this association but nontheless it was there. 'Mixed Bag' runs have quickly become my favourite sessions. Usually the Mixed Bag appears 10 days prior to a race and/or an abbreviated version 4/5 days before. So if a mixed bag is on the schedule then racing is coming up! Yesterday we did a mixed bag at Beacon Hill in what were great conditions. Using the petting zoo as a regroup zone Simon and I ran the workout on the mile and 800 loops. I'd never ran the 800 before, quite liked the layout and feel of it seemingly being just 400. With peacock gallery providing boistorous, distracting mating calls we not only had to hold form during the varying pace workout, but also mindset. Later in the afternoon I had a great ride on my new Teschner SL9, which I will review soon on our Trimes Team Blog. Enjoying the spring weather which has started to become consistent I warmed up for 50' out into Metchosin before riding a 'spirited' 1hr sweet spot loop which I've embeded below. I created this segment on Strava so currently hold the KOM if your interested in taking it down: The first time I rode this loop was roughly four years ago with the vintage BAMF Filliol Crew. Beijing was approaching and the boys had labeled this ride the 'Beijing Loop'. It was to be their final major bike workout before heading off to China. I lasted perhaps 20' before being shelled by the powerhouses of Jordan Rapp, Colin Jenkins and Simon. Joel motorpaced me behind the cube for a while until I almost blew over the barrier on the Roche Cove descent. After that I think he figured 'this kid is on his own.' This Sunday I made some slight deviations from that loop to make it as close to 1hr as I could. Couple more days preparing here in Victoria then off to San Diego for round #2 of the WTS. Race goes Saturday at 2:30pst. 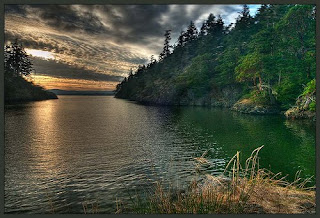 Back on the grid, back to posting ramblings about not a lot besides training, racing, and Misc. After a consistent block of training in Victoria throughout February we headed back to the Snowy Farm that is New Zealand for another dose of Flat Whites, roadkill, 13k dirt road, and stunning backdrops. The first three weeks were spent up at Snow Farm with the New Zealand, French and Dutch. After Mooloolaba the crowd thinned out significantly for the last week, but with Kris Gemmell having the voice of ten men "The Shining" did not ensue. We then moved down into Wanaka for three weeks to sharpen up for Sydney. The camp had many hard sessions, but my heartrate probably hit it's peak one early morning driving down from the farm where I nearly drove us off a cliff. Jucy, our van rental, took a lot of abuse on that trip but I was sure as hell happy that she managed to right herself inches from toppling over that drop. 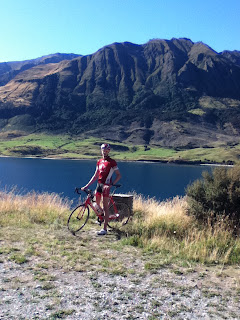 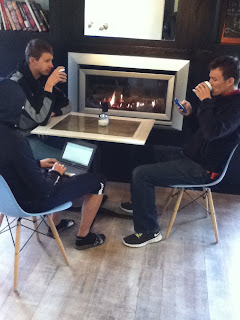 Getting Warm before a chilly lake Swim 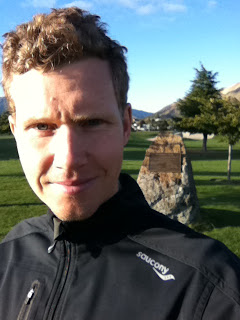 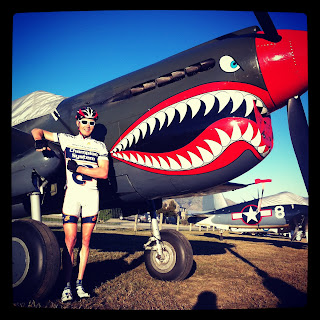 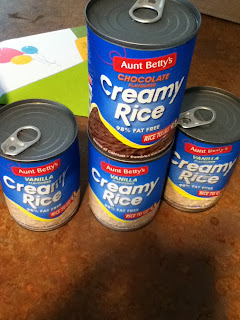 Imported Some of New Zealands Finest...on sale for 10$/can @ craigslist
Finishing up in Arthurs Point, near Queensland, we hopped accross the Tasman to Aussie for the first round of the WTS series. It was my first visit to Oz and I enjoyed it and the hospitality of friends Dave and Kira. Staying out in Manly Beach I was in and out of the city via a 30' ferry that gave you quite the perspective of Sydney, its beaches and general layout of the the harbour. Expecting to have a solid race, I was instead given a shocker. The race was really over for me about 1000m into the swim. A slip on the bike was just icing on the cake for a disappointing DNF to 2012. With a week to reflect on the outcome I had quite a lull in motivation and desire. This was in fact the issue I believe in the race, a lack of fire from within to compete and to resist complacency. In racing you can never be content with where you are. This current week has offered a couple of opportunities to rekindle. Last night I raced in our local Crit Road series up at Caleb Pike. It had been over two years since I'd rolled in one of these and as I rode up to the start some fond memories started to resurface. Caffeine pills Sharpie? In the A group we had about 20-25 riders start. Amongst the pack were a few Cat 1's who would make this one quite interesting. It became quite apparent that I had been away from crit racing when I clipped in and found myself almost being dropped within the first 500m. I couldn't have asked for a better sim of an ITU bike. We rode for just over an hour and avgeraged 280W, normalised to 337W! A lot of sprints and surges. 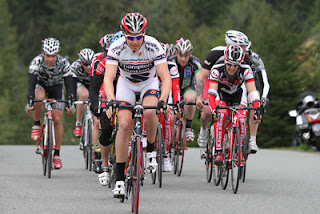 On Sunday I'll run the Times Colonist 10k downtown in what should be another great event to get the juices flowing before a revisit to WTS racing in San Diego on May 12th. Stay tuned.
Posted by A-Russ at 12:26 PM 1 comment:

Once you think you've got it, someone else is GETTING it.

In the last 4 days i've watched this clip dozens of times. Everytime it reminds me of a phrase, sport pyschologist Dr. Bruce Pinel, based here in Victoria, told me a few years ago.

"Don't race to the finish line....race through it"

Noa and I are fans of Diners Drive-Inns and Dives, wait, who isn't?

Anyways, a while back, Guy visited Vancouver and went to a cafe in East Van called Red Wagon. Known for its modern comfort food, one of its specials is Pulled Pork on Pancakes...... this was the seed to what ranks up there as one of the best dinners I've had, no joke.

Noa, has a recipe for Swiss Chard Cakes that is top notch on its own, add to that some 6hr slow cooked pork w a chocolate/cayenne rub, bbq sauce from scratch and her complimenting kale slaw and this is what you get: 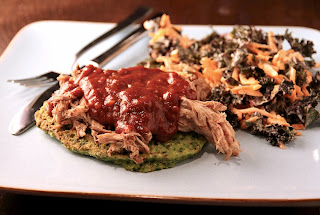 For sure to be a part of her sport nutrition cookbook in early summer, I do enjoy being her #1 tester.
Posted by A-Russ at 9:43 PM 1 comment:

A-Russ
Trying to make it in Triathlon before I get old.

Mouth washing w drink has been shown to help performance. Disregarding any GI issues, will I get a double bonus if I mouth wash and ingest? 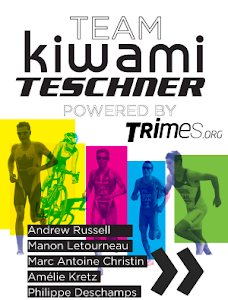 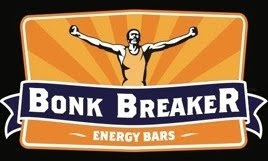